What is  the “Comfort Women Issue?”

The term “comfort women” refers simply to prostitutes in wartime. But Koreans have long been promoting the “Discount Japan campaign”,a false version of history that Japan abducted hundreds of thousands of
Korean women and coerced them into sexual services for Japanese soldiers outside of Japan during World War Ⅱ.
This is, for practical and logical reasons, a fictitious version of history.

The U.S. Miltary official document “Japanese Prisoner of War Interrogation Report No. 49.” exclusively and vividly shows how well comfort women were treated. They were simply not sex slaves. 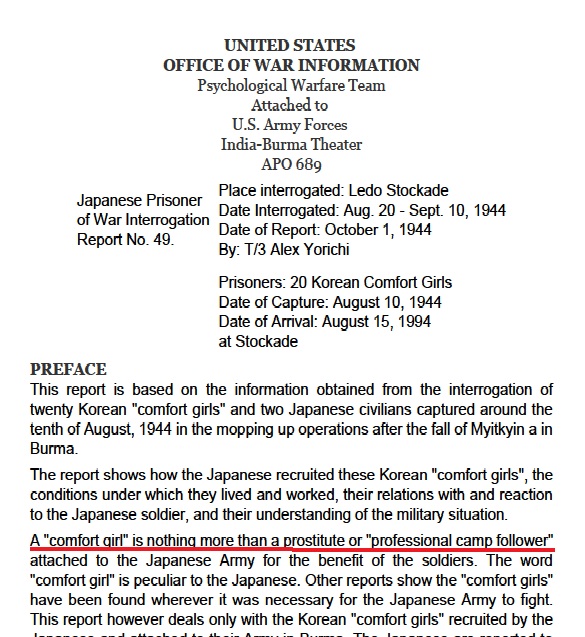 A Korean comfort woman named Moon Ok-ju, a former prostitute who worked in Burma, visited the Shimonoseki Post Office in Japan to withdraw her savings, and found out her original ledger was discovered and confirmed.(Note: In Japan, the Japanese Post Office has several  banking functions.)
She worked in Burma during the period of two years and three months between June 1943 and September 1945, and accumulated a total savings of 26,145 yen in deposits at the military post office. In the 1940s, 5000 yen would have been  enough to purchased a house in Tokyo. 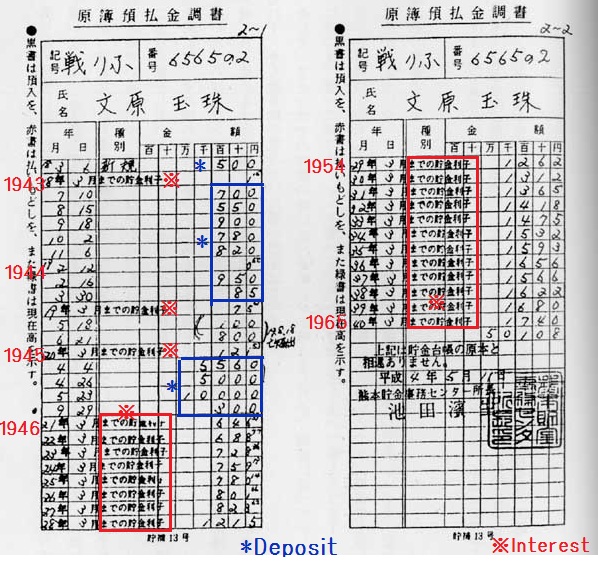 Newspaper advertisements recruiting comfort women appeared in the Keijo Nippo and Mainichi Shinpo, the large Korean daily papers during that era, stating that remuneration was 300 yen per month, and that advances of up to 3,000 yen might be granted. The monthly pay of a Japanese Army private at the time was 7.5 yen, and a sergeant made 30 yen. 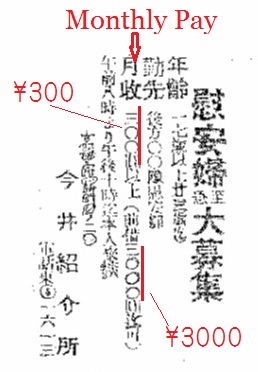 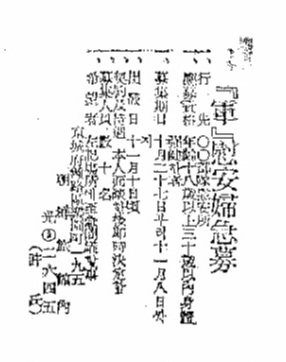 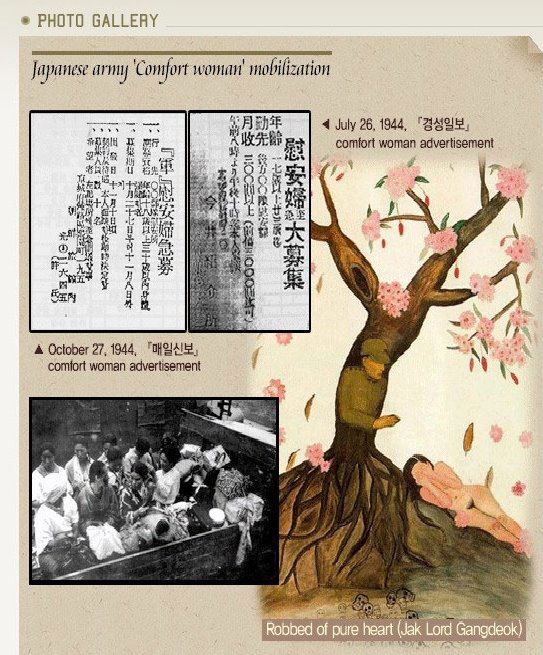 Source material released by the Korean government in an attempt to demonstrate that Korean women were coerced into serving as comfort women; strangely enough, it includes newspaper advertisements for comfort women

During the annexation of Korea by Japan, all the mayors of the villages in Korea were Korean, and most of the police officers were Korean.
The South Koreans insist that 200,000 women were abducted by the Japanese troops from villages.
To abduct such a huge number of women would not have been easy.
If Japanese troops had abducted the women from the villages, where were all the village mayors and policemen? Why didn’t the Korean people do anything to guard and help the women? Why didn’t they do anything when their people, and especially their women, were taken away by the Japanese troops? Why weren’t there anti-Japan movements? 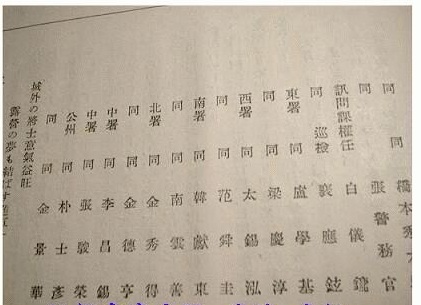 In 1983, a former Japanese soldier,Seiji Yoshida, suddenly claimed that Japanese soldiers had hunted for Korean women in Cheju to force them into sex service for Japanese soldiers. However, elderly people who were familiar with the situation during that time denied this claim in the Cheju newspaper in 1989. One 85-year old woman at that time said that if 15 women had actually been forcibly taken away from a village with only 250 families, it would have been big news, but, she said, that did not happen. And even the Japanese soldier in question admitted he lied in 1995.

Afterwards, with agitation from Japanese leftist groups, many Korean women suddenly started speaking out, saying, “I was one of the comfort women” to possibly receive a large compensation from the Japanese government in 1991. However, it is very strange that not a single woman came forward for more than 40 years after the war.

The testimonies of these women are vey difficult to believe because their “facts” change with each telling. It has been documented that some of these women have changed their stories more than ten times. Their testimonies are not backed by provable facts or documentation. See the table below.

Differing Versions of Lee Yong-Soo’s Account of Her Kidnapping

The Japanese government conducted careful investigations and examination of the related documents and listened to the testimony of witnesses from December 1991 to August 1993.

Based on their careful research, the Japanese government officially denied “enforceability.”

********************************
The Korean police, then under Japanese control, was ordered to arrest procurers who coerced women into serving as comfort women.
The article below concludes by saying that when the police arrested the procurers, there would be full disclosure of the methods used by malicious brokers;  for instance, cajoling women into becoming prostitutes by promising  extraordinarily high wages.
As the article clearly demonstrates, the Japanese government dealt severely with inhumane crimes against women, and the military neither kidnapped nor abducted women. 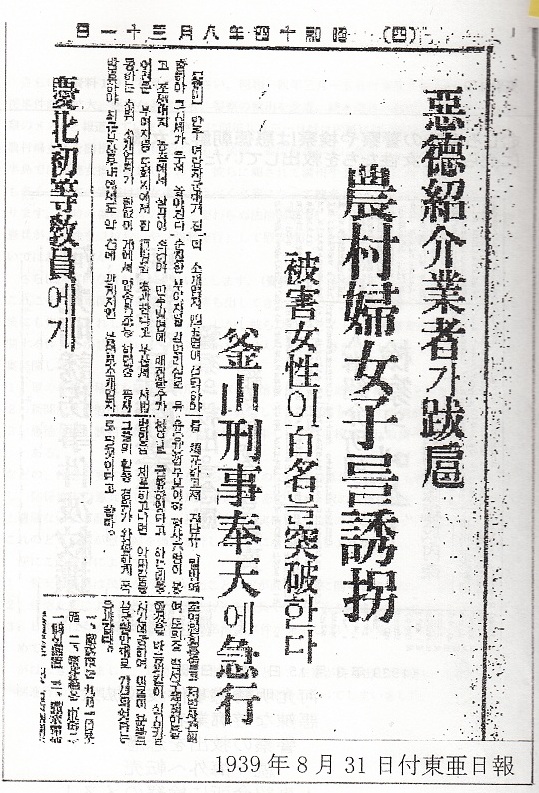 And what were American GIs doing in Korea?
Articles appearing in Dong-a Ilbo, one of Korea’s leading dailies, on January 31 and September 14, 1961 answer the question.
The January 31 article describes a training course for 800 prostitutes conducted by US Army officers and Korean police. Taking strict precautions to prevent the spread of venereal disease was the main focus of the program.
The September 14 article states that the police in Seoul had asked municipal authorities to oversee the registration of prostitutes who serviced United Nations Command soldiers, again in an attempt to prevent the spread of venereal disease.
Therefore, we know that American military personnel procured prostitutes locally, with the cooperation of the Korean government.
The brothels for the military were not particularly unusual. Every country in the world had them.

********************************
Japanese military sexual slavery is completely at odds with historical truth. Wide-spread misconceptions are a violation of our country`s dignity and honor. This could negatively affect our relationship with all nations. Japanese are distressed by this situation, and wish to resolve global misinterpretations and misinformation about the comfort women.

We the People – The White House HERE’S HOW IT WORKS

Fire in the Ice (U.S.Dept of Energy)

Society for the Dissemination of Historical Fact

THE TRUTH ABOUT THE “COMFORT WOMEN”
The Comfort Women Controversy and Actual Misdeeds of the United States Army
Moteki Hiromichi, CEO Sekai Shuppan

The Truth about the Question of “Comfort Women”
Ogata Yoshiaki

Relationship between “Comfort Women” and “Medical Treatment”
By Dr. Kuni Amako
A Member of The Japan Medical Association
Specialist in Obstetrics and Gynecology

25 thoughts on “WE PETITION THE OBAMA ADMINISTRATION TO”