Yumiko Yamamoto: Appeals to the UN, “Comfort Women were Not Sex Slaves”

Hello Everyone! I am very pleased to meet all of you here.

Before I begin my presentation on our plan to visit the United Nations, I would like to express our great appreciation to the Foreign Correspondents’ Club of Japan for accepting me to have a presentation here.

Secondly, by taking this opportunity, let me state some important points.

The notice of my presentation uploaded to the website of the FCCJ says,
“They are annoyed that the term is being used widely these days to depict sex slaves during Japan’s invasion of mainland Asia in 1930s and early 1940s.”

I strongly oppose this sentence.

“We are annoyed by the term “sex slaves” that is being used widely these days to mean comfort women during Japan’s advancement to mainland Asia in 1930s and early 1940s.”

It also says,
“Japanese conservatives and nationalist groups are also disturbed by the 1996 Coomaraswamy report of the UN Commission on Human Rights”.

I hope all of the people who are here today understand that we are not nationalists but patriots.
We don’t discriminate against any particular people.
We are the people who love Japan very much, period.

Now, let me start my presentation.

I am Yumiko Yamamoto, President of the Japanese Women for Justice and Peace also known as Nadeshiko Action.

Nadeshiko Action has many Japanese women members who have joined the group voluntarily in order to STOP THE PROPAGANDA LIES that Comfort Women are Sex Slaves.

——————
The statue put up in Central Park in Glendale makes me feel very uneasy because I am Japanese.

I am married to a non-Japanese and we have a seven years old daughter.

My daughter said, ‘I cannot hate half of myself. Why am I hated?’”
This statue is alienating her from many friends for something she has nothing to do with.

The statue has no educational value at all.

It is rather promoting confusion and racism to discriminate against Japanese people living in the United States.

I believe that the United States of America is the country where a variety of peoples live, thus making the US a very diverse country.

We should not divide people into ethnical groups but bring people together as is the core virtue of the United States of America.”
——————-

The comfort women statue in Glendale says, “I was a sex slave of Japanese military”.

On the memorial statue at Palisades Park in New Jersey, the following words are written.
“In memory of the more than 200,000 women and girls who were abducted by the armed forces of the government of Imperial Japan 1930’s-1945 known as comfort women.”

This is how the lies about the comfort women are being spread to the world.
These lies not only ruin Japanese dignity but also threaten security of Japanese and Japanese Americans in the United States.

Nadeshiko Action never wants this issue to be inherited by our children generation after generation.

By the way, the United Nations Commission on Human Rights called UNCHR has regarded the comfort women challenge as an international issue.

Nadeshiko Action collaborates with the Alliance for Truth about Comfort Women called “ATCW”, which has formed the Japan’s Collaboration Team for UN Committee.
A delegation comprising key members of this alliance will visit UNCHR in Geneva from July 14th to 16th.
ATCW is an organization, in which many groups involved in the comfort women issue are members.
I am the leader of the Japan’s Collaboration Team for UN Committee and Kiyoshi Hosoya, who is a historian, is Secretary General.

The delegation has three purposes.

First of all, one of Japan’s conservative groups will visit the UNCHR for the first time.

Secondly, the delegation will study the organization of UNCHR and its activities in order for us to make appropriate steps to successively interact with the organization in the near future.

Finally, after returning to Japan, we will make a report on our findings, and will let many people know what is really happening at the United Nations, and will take action to let as many people in the world as possible know how the UN is using the comfort women issue is degrading Japan.

Let me state the views of the delegation on the comfort women issue.

1. What were Comfort Women?
Comfort Women were not sex slaves but were war-time prostitutes who enjoyed time spending freely, and who worked under contract in exchange for a highly paid monetary reward for that time.
Their wages were often 100 times more than the average Japanese soldiers.
As a proof for this, please see the document by United States Office of War Information.
The document, which was written in 1944, clearly states that the living conditions of these girls were “near-luxury,” “they had plenty of money with which to purchase desired articles,” and “they amused themselves by participating in sports events……attended picnics, entertainments, and social dinners.”
As this document indicates they were nothing but well-paid prostitutes.

3. Stories of Comfort Women
Stories told by the so-called comfort women are the last remaining basis of the argument on the sex slave.
The stories have not been verified yet.
The fact that the argument is based only on the stories without pursuing or proving the sex slave means that the sex slave is fabricated story.
The stories of the so-called comfort women lack any substantial evidence and cause doubts about their truth.
The Coomaraswamy Report quotes those unverified stories as evidence.
The issue appeared around 1991, however the fact that year after year for over twenty years no verification has been made for the stories means that the stories of sex slave either cannot be verified or are fabricated.

They are our official views.

Thank you very much for listening. 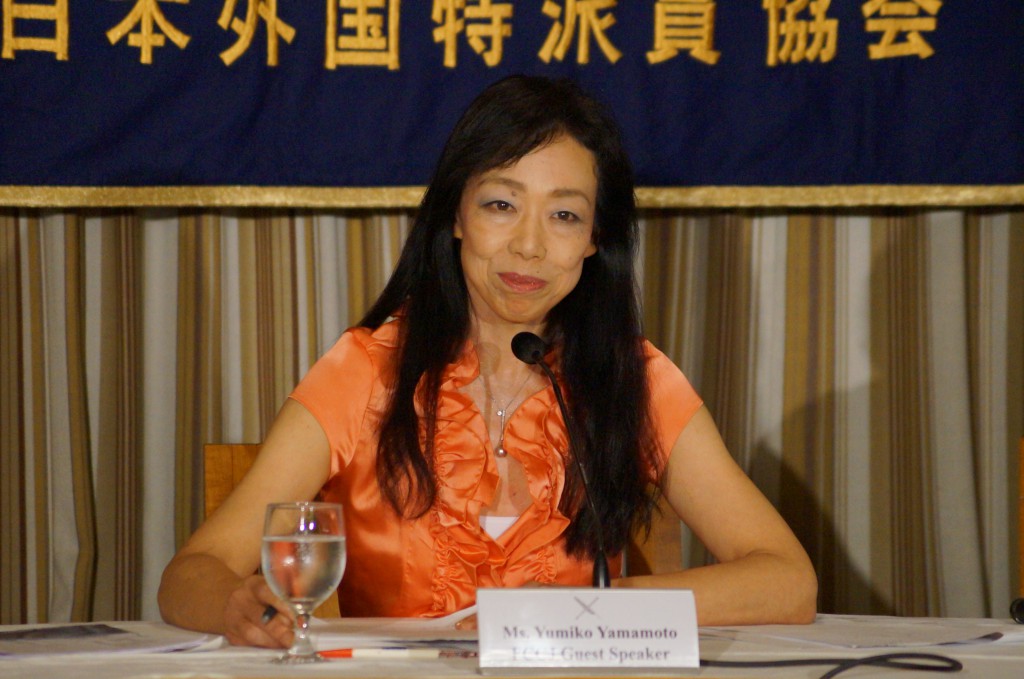 7 thoughts on “Speech at the Foreign Correspondents’ Club of Japan on July 9th, 2014”