CONTRACTING FOR SEX IN THE PACIFIC WAR:
A RESPONSE TO MY CRITICS
J. Mark Ramseyer
01/2022 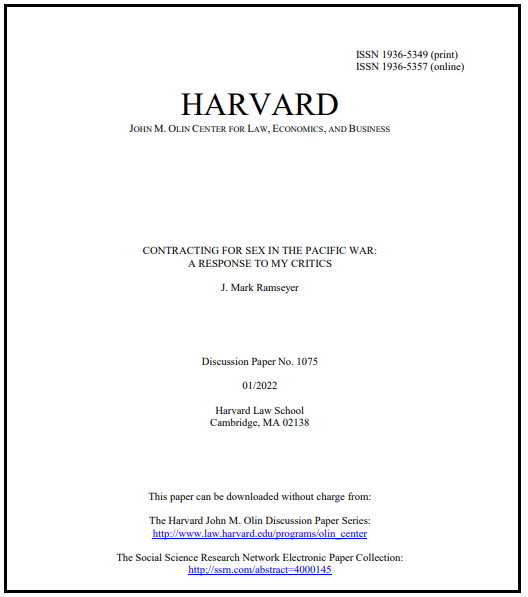 【 Abstract 】
In “Contracting for Sex in the Pacific War,” International Review of Law & Economics (IRLE) (2020), I explored the economic logic behind the contracts made by Japanese and Korean prostitutes with the brothels at which they worked. Among the terms of the contracts that I tried to explain were the way in which they coupled a large initial payment with a maximum period of service. I sought to interpret these and other contractual terms as addressing classic economic dilemmas.

Instead, some critics complained that I did not examine actual prostitution contracts. Readers of my actual article will know that I never claimed to have a data set of actual contracts. To the best of my knowledge, very few actual contracts survived the war. What I did rely upon—as I make clear in my article—is information about the prostitution contracts from government documents, wartime memoirs, newspaper advertisements, a summary of a comfort station accountant’s diary, and so forth.

Other critics compiled a long list of asserted mistakes concerning the accuracy, relevance, and interpretation of citations in my article. I respond to these claims below. Most of them are not mistakes at all. A small number of them are mistakes, but they do not affect my analysis of the contract terms.

Most critics emphasized the immorality of the comfort women system. In particular, some critics claim that I ignored the fact that some women were deceived into becoming comfort women and were cheated and otherwise mistreated by owners of the comfort station brothels. Readers of my actual article will recall that I mention these points in my article.

Crucially, in 1983 a Japanese writer named Seiji Yoshida wrote a best-selling book claiming that he and a posse of soldiers had dragooned Korean women at bayonet point and raped them, before sending them off to serve as sexual slaves. A famous 1996 UN report on the conscription of Korean women relied on this book, and it is in the wake of the book that a small number of Korean women began claiming that they had been conscripted even though some of them had earlier given different accounts. Before he died, Yoshida admitted that he had fabricated the entire book. Yoshida’s fabrication attracted substantial attention in Asia and abroad, including in the New York Times.

The comfort women dispute began with Yoshida’s fraud. Yet this astonishing and crucial fabrication is not mentioned by any of my critics even though many of them are Japan or Korea experts and are surely aware of it.

One thought on “2022年1月ラムザイヤー教授の最新論文「Contracting for Sex in the Pacific War: A Response to My Critics」（太平洋戦争における性サービスの契約：私に対する批判への答え）”