Shusenjo— The Main Battleground of the Comfort Women Issue (film)

1.  Shusenjo is a documentary film which has three versions with subtitles in English, Japanese, and Korean. Miki Dezaki directed and produced it and publicly released it on April 20, 2019.1  As the English subtitle indicates, so the film does deal with the comfort women issue.  But it presents other matters as important issues, too.

3.  The film focuses on the intellectuals who stand against the South Korean allegations. Dezaki maliciously labels them as denialists, revisionists, or rightists (*the neutrals hereinafter) and criticize them.  Then he highlights Prime Minister Shinzo Abe as an unforgiven politician.

4. Methods Dezaki employed for filmmaking are questionable because he chose,

4.1.  To interview the neutrals for the purpose of criticizing their views.

4.2.  Not to reasonably and seriously scrutinize the propriety of the South Korean allegations below.

(1) Forcible/coercive recruitment of the comfort women by the military and the Japanese government is argued without citing too much about Seiji Yoshida and none about Kako Senda. What they said and wrote is treated in the film as a very small portion of the big picture.  It is very hard to understand why Dezaki presented a video clip image of Yoshida.  For, it is Yoshida who set a fire on the comfort women issue.  This is no laughing matter.

(2) The existence of 200,000 Korean comfort women in warfront is handled as one of the views because it is the human rights violation that counts most.

(3) The fact that the comfort women—who provided sexual services for troops—were in a slavery condition in the broadest sense of the term is emphasized without defining the difference between sexual slaves and prostitutes.

(4) Whatever liberty the comfort women enjoyed in warfront is marginalized because it jeopardizes the understanding that they were victims of sexual slavery.

4.3. To impress the audience that the Kono Statement is proof that the Japanese government has acknowledged its wrongdoings in the past, without carefully analyzing the entire statement.

4.4. To bash Japan and Premier Abe for its/his orientation to slight the comfort women issue and to promote militarism, nationalism, and Shintoism, so that Japan’s prestige in the international community continues to be damaged.

4.5. Not to mention how Dezaki obtained videotape interviews with the neutrals. He partially hinted it during an after-the-show interview he gave to a journalist in London.2

4.6.  Not to properly appraise the book Professor Park Yu-ha wrote, “The Comfort Women of the Empire.”

4.7.  Not to mention the claim of Professor Su Zhiliang of the Shanghai Normal University that the number of comfort women to have been more than 400,000, including 200,000 Chinese women because Dezaki wants to emphasize the aspect of the human rights infringement for the issue.

4.8.  To believe what Yoshimi said about the Semarang Incident, without carefully reviewing the Batavia trial transcriptions.  There have been wrongful convictions not only in Japan but also in the U.S.

5. A few aberrations noted in the film are as follows.

5.1.  Etsuro Totsuka says, “The government did not investigate illegal cases of recruiting women by some crooked agents.  It did not punish them.”  Conventional wisdom has it that Korean agents recruited Korean women while Japanese agents did Japanese women.  Quite a few Japanese consulate reports suggest that Korean house masters ran their comfort stations by employing Korean comfort women.3  Japan’s punishing those Korean agents would add fuel to the fire if it is what Totsuka meant.

6. Dezaki said during an interview session after the film showing in London, “99.99% of historians consider the women were sexual slaves.”2 What he meant is the neutrals are not historians.  But his film does not support those historians weigh facts.  Professor Park wrote that the system of comforting was certainly ‘criminally chargeable’ but it was not a crime under law at the time.4

7.  Conclusion
Shusenjo is a superficial game Dezaki wanted to play.  He merely skimmed the cream of the comfort women issue.  That is why he did not heed to the importance of facts in history, which unequivocally proves he is a pseudo reformist.

The message Dezaki intended to deliver to the audience is to damage the prestige of Japan though he did not disclose any reason for his animosity against Japan.

The film pictures Dezaki not as a researcher who spares no effort to solve the issue but as a representative of the Internet generation with a capitalist mindset.  He sought quick returns to enter the spotlight.

It is unfortunate for Dezaki to have committed himself to the filmmaking.  The longer he continues the film tour, the more damage it would inflict upon his personality development.  He is repeating the history of the self-proclaimed comfort women in South Korea since 1990s: They have kept parroting a seemingly reasonable social cause to become the media icons and they lost personality and opportunities to enjoy real life the world has for them.

There may come a day when Dezaki enlightens himself to become one of the neutrals.

8.1. A misleading e-mail request for interview
Dezaki sent an e-mail request to eight claimants in 2016. He first explained them what he was doing was an academic research or a graduation work, or a graduation project as he was studying at the Jochi Graduate School (Sophia University). Then he asked for a videotaped interview. One of the e-mail sent to Yumiko Yamamoto was as follows (*translated from Japanese into English by Yamamoto).5

“In May 2016, I received an email “Subject: Interview request for a documentary from Mikine Dezaki, a Sophia University graduate student.”

＜ The mail was written in polite Japanese as follows:

I am a Japanese American. I am now a graduate student of Sophia University. Through my research on the comfort women issue, I have come to understand that the issue is much more complex than what I read in the western liberal media. I know that there is a severe lack of authenticated documentary evidence regarding forced recruitment of comfort women and that the conditions for the comfort women may not have been as bad as some activists and academics claim. I must admit that I did believe the western media at one point, but now, I have my doubts. As a graduate student, I have an ethical obligation to present the people I interview with respect and fairness. This is an academic research. It must meet certain academic standards and expectations, which would prevent it from becoming a biased journalistic piece. So, I will produce it with equitability and neutrality. I am going to submit it to the University as a graduation project.＞

8.2. A lawsuit filed against Dezaki
Dezaki interviewed Yoshiko Sakurai, Kent Gilbert, Mio Sugita, Tony Marano, Hideaki Kase, Yumiko Yamamoto, Nobukatsu Fujioka, and Toshikazu Fujiki. All of them believed his documentary was a graduate study till the film was commercially released in April 2019. They issued a joint protest statement on May 30, 2019 and requested him not to show the film to the public because they did not explicitly agree to Dezaki’s intention of making the interviews as part of a commercial film. He refused it. Five of them filed a suit in the Tokyo District court on June 19, 2019 to terminate the film’s public showing and to claim for damages of 14 million yen.

8.3.1. The five plaintiffs of the lawsuit questioned the administrative propriety of Dezaki’s graduate work and his instructor Professor Koichi Nakano’s supervision. They mailed a contents-certified mail to the Jochi University on August 28, 2019.6 They requested the university (1) to investigate the graduate work and (2) to admonish both Dezaki and Professor Nakano. The claimants cited the university’s guideline on researches which pertains to people who become subjects of a study/discussion. Its subparagraph 5(2)ka stipulates, “A researcher must expeditiously destroy information and data of a subject person when he/she withdraws his/her earlier consent to the research at issue.”

8.3.2. In response, the university established a five-member investigation panel. After the claimants questioned the impropriety of the panel composition and Nakano’s exclusion as one of the accused, the university changed two of the five members and included Nakano as the accused.

8.3.3. On January 15, 2020, the university mailed a letter of request to Fujioka. President Yoshiaki Terumichi requested Fujioka to refrain from disclosing to other people any matter related to the panel investigation. Terumichi was concerned about Fujioka’s use of Facebook as a venue to discuss the request and university responses. He said such an act would jeopardize the investigation proceedings.

8.3.4. The president’s letter of request seems to be reasonable under a normal circumstance. Problem is a fact that Dezaki has been promoting the film’s public showing in foreign countries while the panel investigation is in progress. In fact, he toured 34 colleges and universities in the U.S. and Europe since September to December 2019, and additional 19 colleges and universities in the U.S. and Canada from February to March 2020. The president’s warning to Fujioka and his allowing Dezaki’s tours are inconsistent.

8.3.5. For information, Nakano held talks with Chairman Kazuo Shii of the Japan Communist Party, which were printed in the Akahata, official daily of the party, on January 1, 2016, January 1 and February 22, 2020.6

9. As for the lawsuit filed against him, Dezaki said that it might take one year or even ten years before a judgment is given. He also said the lawsuit like that was called a strategic lawsuit against public participation (SLAPP) to suppress freedom of speech.2

5. Nadeshiko Action Homepage, Eiga Shusenjo Daigakuinsei no Shotai wa Saha no propaganda Eiga [Film Shusenjo, the film is a propaganda made by an undergraduate of the left wing] (a/t). Posted on September 16, 2019

6. The Second Symposium to Accuse the Deceitful Movie Shusenjo at Kensei Kinen-kan, Tokyo, on February 27, 2020. 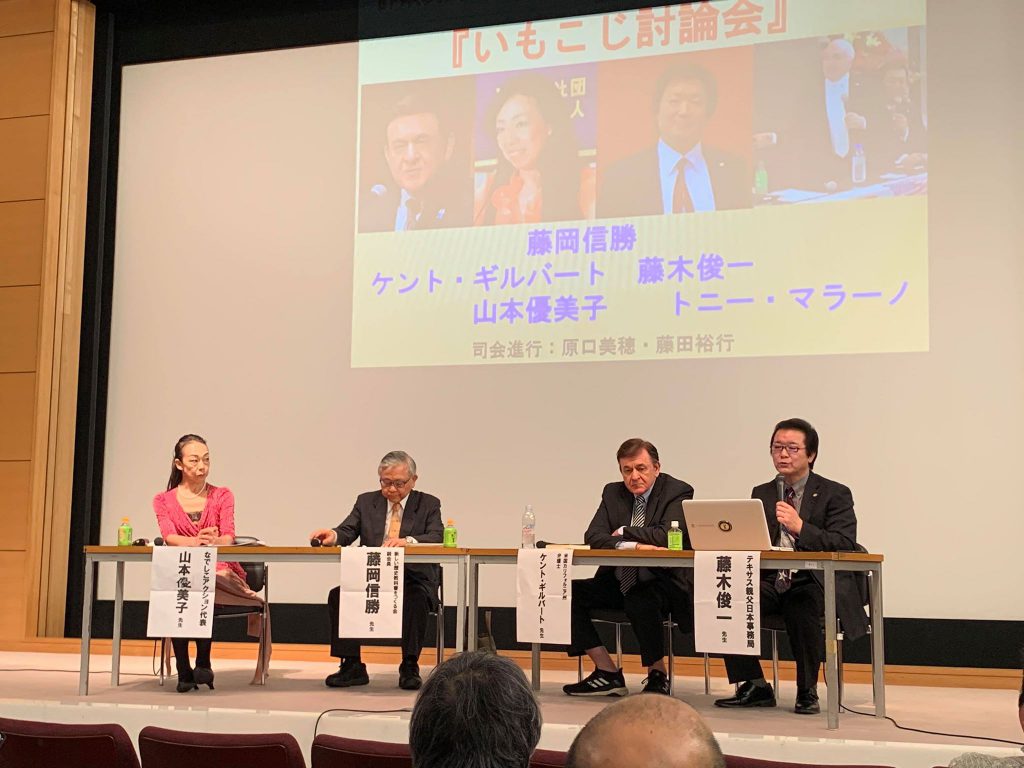 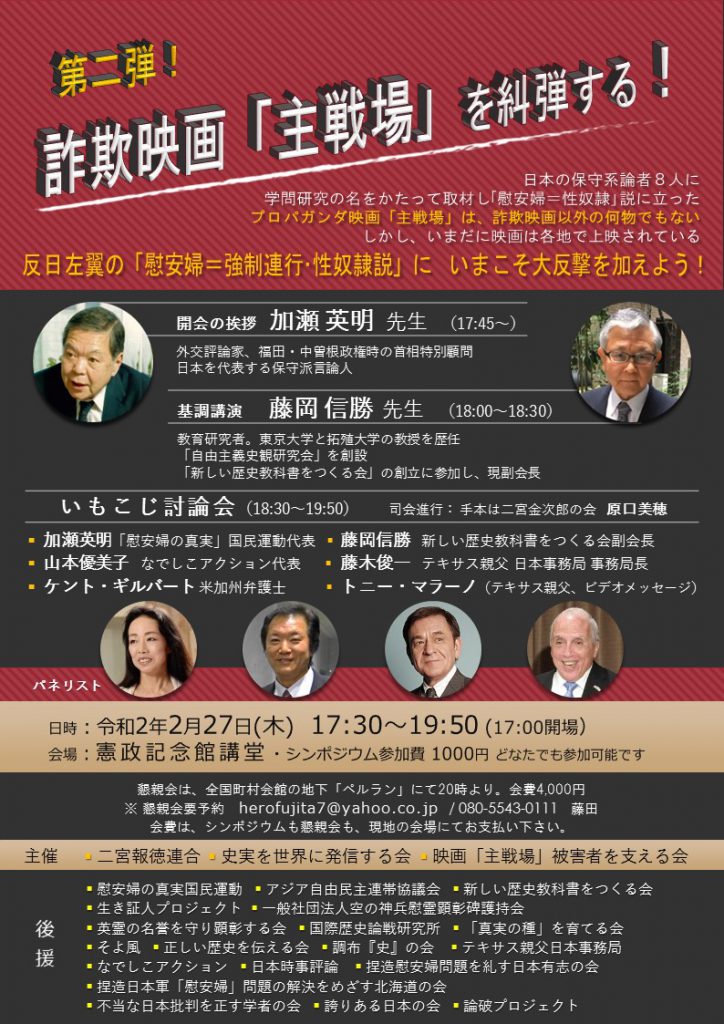 それではみなさま Give peace a chance！ 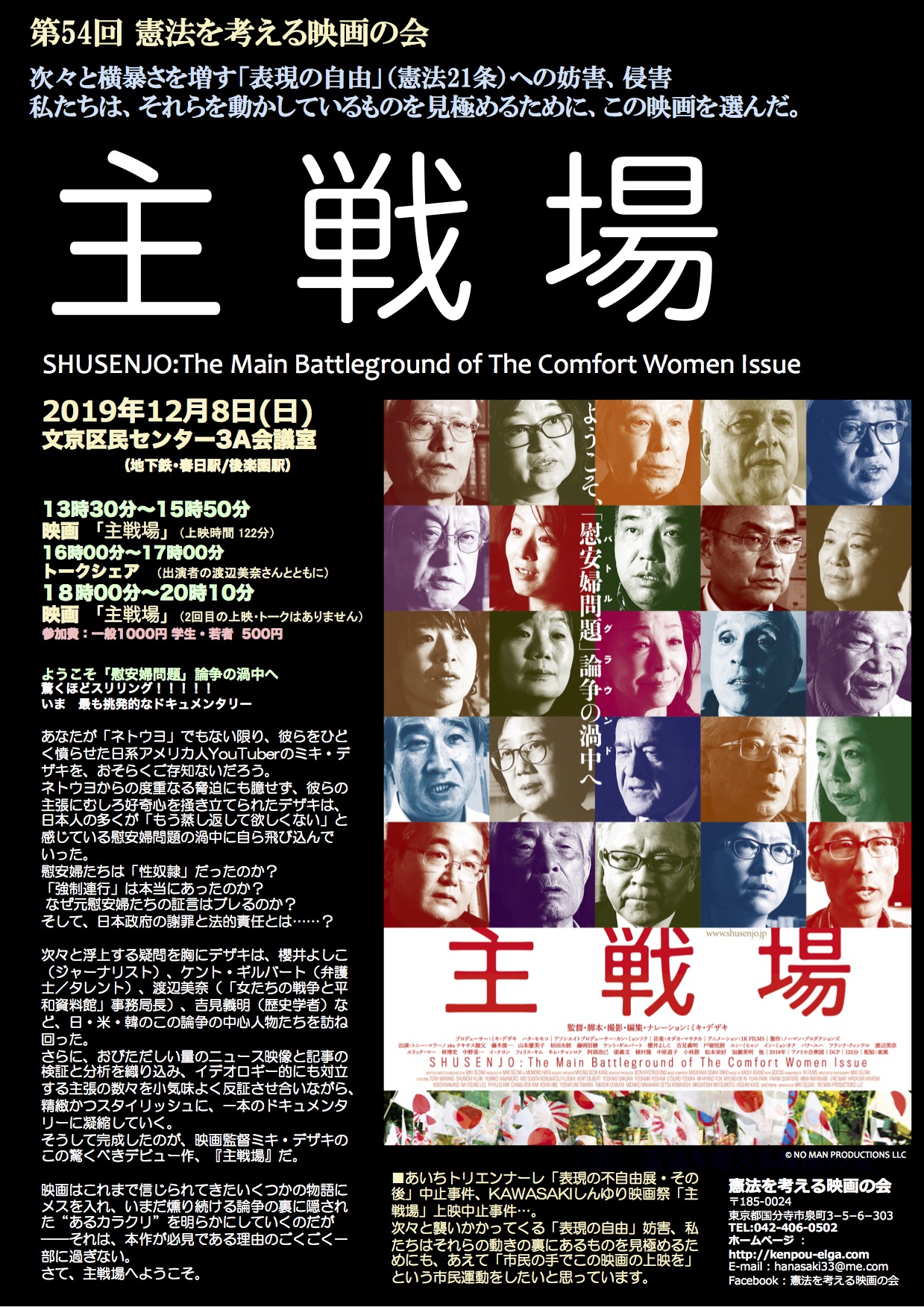